CAYCE, SC – The City of Cayce congratulates Fire Chief Steven Bullard and City  Councilman Hunter Sox for being recognized as one of Lexington County Chronicle’s 2023 Top 20 Professionals Under 40. 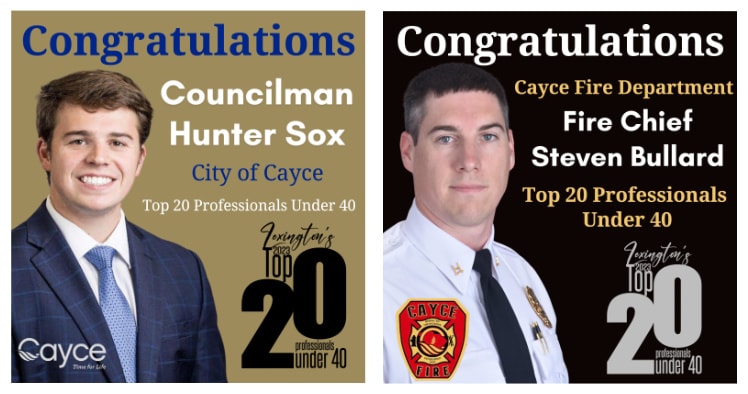 Chief Steven Bullard began his career as a volunteer firefighter in 2007. Since then, Bullard has received several awards for professionalism and bravery. He was named Fire Chief for the City of Cayce Fire Deprtment on October 21, 2021.

Councilman Hunter Sox is the City Councilman for District 3. He received the McLaughlin Scholarship, an honor for an elected official to attend the Congress of New Urbanism in Oklahoma City, in February of 2022.

“On behalf of the City of Cayce, we are proud of the impact these men have had on not only our City, but our County as a whole. We appreciate their willingness to serve with great honor and integrity in everything they do,” stated Cayce Mayor, Elise Partin.

The Top 20 Professionals Under 40 award recognizes the outstanding work of the top 20 young professionals in Lexington County who demonstrate commitment to their career, family and community.

This article was originally published on Thursday, January 5, 2023.